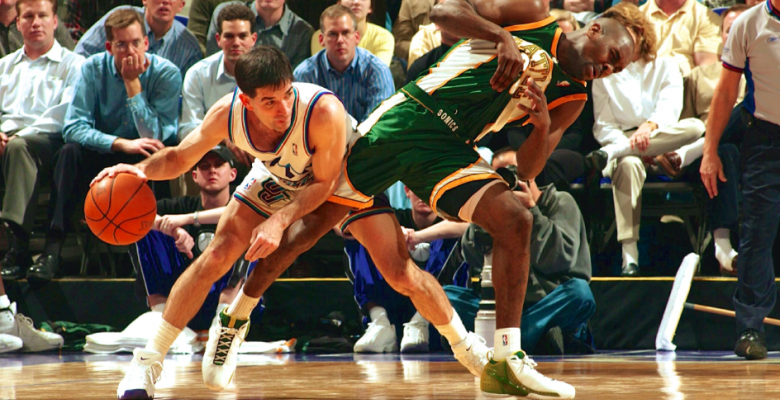 Q: Did John Stockton ever talk trash back to you?

A: „Never. That is the reason I really respected him because you never could get in his head. He’s the hardest person I ever had to guard. I tried to talk to him, try to do something and he’d just look at me, set a pick and cause me [to get mad and] get a tech. And then all of the sudden it was over. There was much respect to him doing that to me. It taught me a lot.“

Q: Even so, you once said you were better than Stockton?

A: „I was. I really think I was better as an athlete and in everything all-around. But he was just a smarterbasketball player than us. He just got it done. I do think I was a better basketball player. I can do more things skills-wise. He just showed he knew how to play the game and that was the biggest difference.“

Q: You say Stockton was the hardest to guard, but what about guarding Michael Jordan?

A: „Those battles were a little easier. I would have Jordan get mad at me and go back at me. He knew he was really talented and could do whatever he wanted to. But [Stockton] was more of a challenge to me than guarding someone that would talk back to me. When you talk back to me and say something to me it made my game go to another level. John was one who wouldn’t say nothing and you couldn’t figure him out. He’d keep going in the pick and rolls and he and Karl Malone would score a big bucket. At times I would guard Jordan and get him mad and into other things.“